Other methods are also available, including electro-osmosis, horizontal wellpoints and relief wells, but these are much less commonly used.

This blog discusses eductor well dewatering for construction dewatering and mine dewatering projects.

WHAT IS EDUCTOR WELL DEWATERING?

The eductor system (also known as the ejector system) is a technique where bored wells are pumped by a specialist vacuum pumping system. Eductor well systems can be very effective to control pore water pressure in low permeability soils such as very silty sands, silts, or clays with permeable fabric. Typical applications of eductor wells include stabilisation of the side slopes and base of excavations in soils that would be difficult to dewater with wellpoints or deep wells.

A key advantage of eductors is that that they can allow vacuum-assisted drainage of poorly draining fine-grained soils. This is possible because a vacuum of up to 9.5 m head of water can be generated in the base of the well. This vacuum is achieved by circulating high pressure water (from a tank and supply pumps at ground level) down small diameter supply riser pipes in the well to a nozzle and venturi located in the eductor near the base of each well. The high velocity as the water is forced through the nozzle creates a very low pressure (vacuum). The vacuum draws groundwater into the well where it combines with the circulating water and is piped back to ground level via a return riser pipe and thence through the reservoir tank at the surface and back to the supply pump for recirculation. The excess water pumped from the well is discharged from the system.

These systems are typically applied in a similar manner to wellpoint or deep well systems whereby multiple wells act in combination to lower groundwater levels across the area of the excavation. Because the technique does not rely on suction from the surface, it can generate much larger drawdowns of groundwater level than a wellpoint system. However, due to the limitations of equipment that is typically available (and upper limits on supply pressures) it is rare for eductor systems to be used where drawdowns are in excess of 60 m. 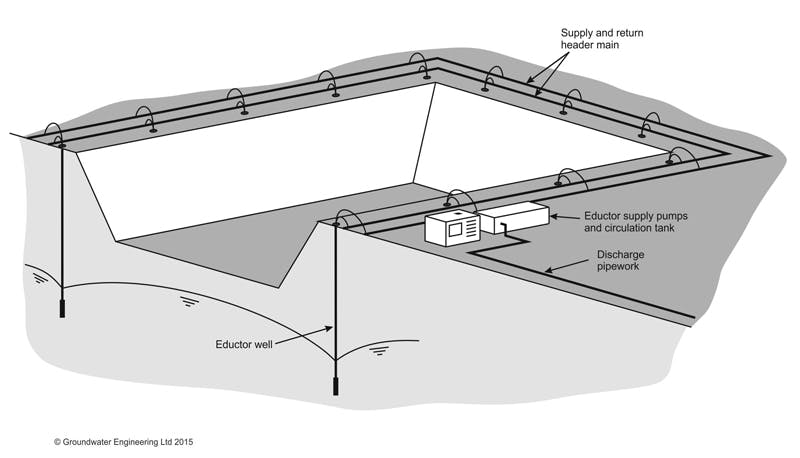 Typically, the eductor wells are located just outside the area of proposed excavation, and are fed by electrically driven high-pressure supply pumps located at ground level. Twin supply and return mains are laid to each well, to allow water to be circulated around the system. Each eductor well is connected to the supply and return mains by small diameter flexible hoses. In addition to the pumped wells there will be a requirement for monitoring wells to allow groundwater levels to be monitored. 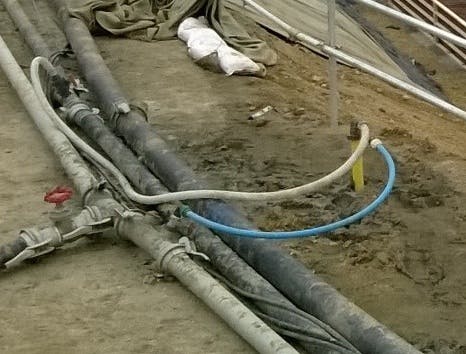 Eductor wells can be installed by similar drilling methods to deep wells, using either rotary drilling or percussion drilling methods, or by jetting methods commonly used to install wellpoints. Once the well is formed, a perforated well screen is installed and surrounded by filter gravel. For eductor wells the internal diameter is usually smaller than a deep well. Internal diameter of eductor wells is typically 50 to 100 mm, which is sufficient to accommodate the eductor and the associated riser pipes. The maximum groundwater pumping capacity of eductors commonly used for dewatering is in the range 0.3 to 0.6 litres/second (although higher flow rates may be possible with special equipment).

Eductor well dewatering can be very effective is in low permeability soils (such as silts or silty sands or clays with a permeable fabric). In these cases the well yields can be very low, and it can be difficult to reliably operate a deep well system with submersible pumps, as the low flow rates may result in pumps burning out. The low flow rate capacity of eductors is well matched to such low well yields (eductors can operate at flow rates far below their rated capacity without risk of damage). Furthermore, if the top of the well is sealed to prevent air entering, the eductor will generate a vacuum in the well, which will promote drainage of groundwater from the soils around the well. Eductor well systems can often form part of ‘pore water pressure control’ systems used to ensure geotechnical stability by increasing effective stress levels in the side slopes and base of an excavation in low permeability soils and rocks.